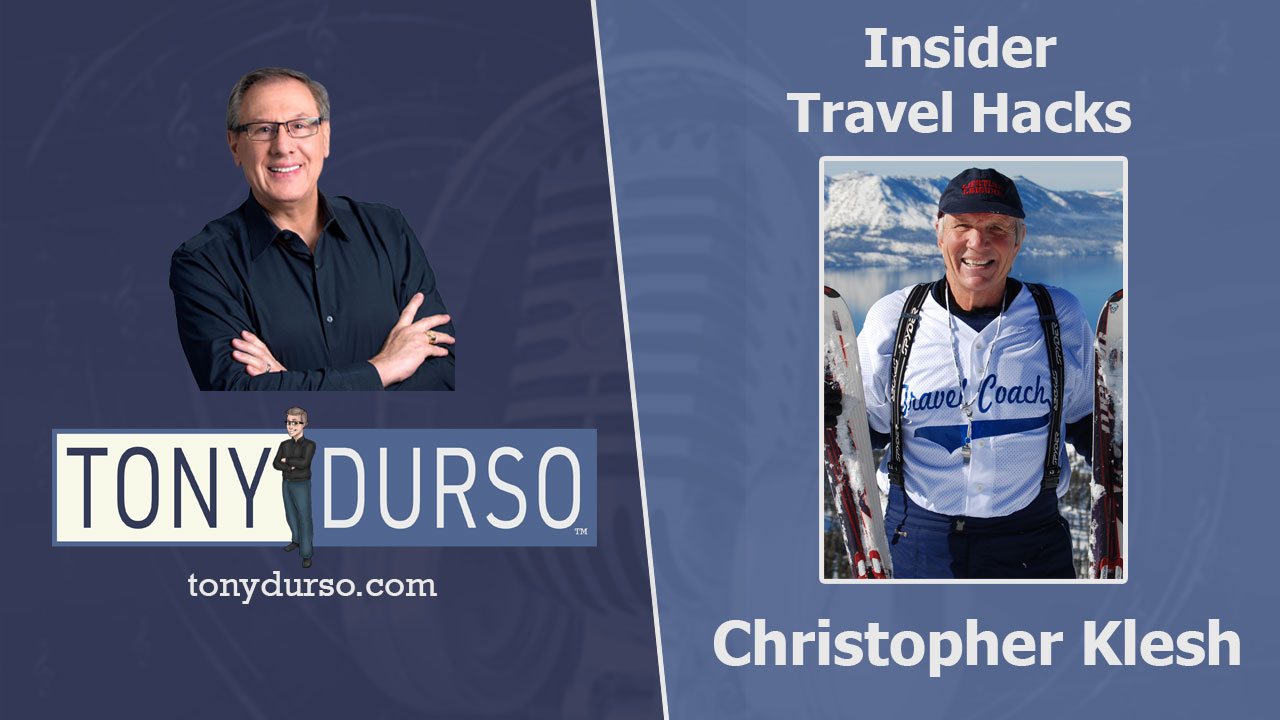 Coach Chris is a retired corporate executive who loves to travel and stay at highly desirable vacation resorts with national renown for quality, service and amenities.

Christopher Klesh is a straightforward guy who tells it like it is; even still, he won’t fail to inspire you to go out into the world and take what you deserve. Up his sleeves are the inside travel hacks and secrets that allow you to travel in luxury for pennies on the dollar. In doing so, he empowers you to see for yourself that the best things in life aren’t things but health, family, friends, faith, and those precious memories and experiences that stick with you for a lifetime.

Chris starts his story by stating that he feels lucky to have grown up in a family that valued travel and staying active. At 12 years old, he spent six weeks in Europe. He also grew up an athlete, considering himself a “cultured jock,” who not only handled himself on the court and field but conducted symphony orchestra and Broadway shows with ease.

As a young adult, Chris graduated from Indiana University School of Music, Radio, and TV. His love for action never subsided as he volunteered for the army and became a Vietnam War veteran. He began in the Army Reserve and then transferred to the National Guard, and with his musical background, he conducted one of the military bands during his service. He then continued his corporate career working in New York for The Bell System, a phone company, later led by AT&T, who subsequently paid for his MBA in financing and marketing.

Fast forward, and at 52 years old, after 31 years with the phone company, he was offered a severance package with a year’s pay. He took this as a sign from above to go off on his own and tackle his worldwide bucket list (first class, of course). Chris’ public speaking background he garnered during his career, being the guy in the suit presenting PowerPoints, plus naturally taking a liking to the attention, has served him well since. He uses his talents now to speak and motivate entrepreneurs, families, and those in the middle class to go after the things in life that truly matter (and you guessed it, they aren’t material.)

Well-connected in the travel industry, having interviewed hundreds worldwide, from concierges to tourists, he knows the ins and outs and the ultimate ways to get where you want to be. He himself claims to see almost 20 Broadway shows per year and, as a self-titled “ski bum,” hits the slopes from the world’s most luxurious chalets 80 to 100 days of the year. Whether St. Moritz or Hawaii, he’s doesn’t settle for less than the crème de la crème—and he wants you to join him.

With a scoff, Chris may joke about the state of the world, the debt the country faces, inflation, the current political environment, and that many people struggle to pay for vacations, get-togethers, and special occasions like weddings that they want and deserve. But he’s the solutions guy, not the excuses guy. “You don’t have to be rich to live rich,” he mentions.

He totes that you can “live a lifestyle of privilege,” traveling for pennies on the dollar. From top ski resorts to playing golf on the best golf courses to famous Broadway shows to national parks—the whole gambit and more is waiting for you to reach out and take it. Listen to learn more about his philosophy that together, we “travel not to escape life but for a life not to escape us.”

Hello Fresh
Would you like some Crispy Parmesan Chicken with Garlic Scallion Couscous & Lemony Roasted Carrots? Or how about Bravo Balsamic Chicken with Roasted Green Beans & Herby Potatoes? Just go to hellofresh.com/durso16 and get 16 free meals w/purchase, free ship & 3 gifts!

Novo
No fees banking. No ATM fees. No bank wire fees. No transaction fees. No ACH fees. No hidden fees. And to balance out the negatives: Yes, yes, yes, yes, yes! Just great free banking with over $5000 in perks and discounts. Sign up free novo.co/tony